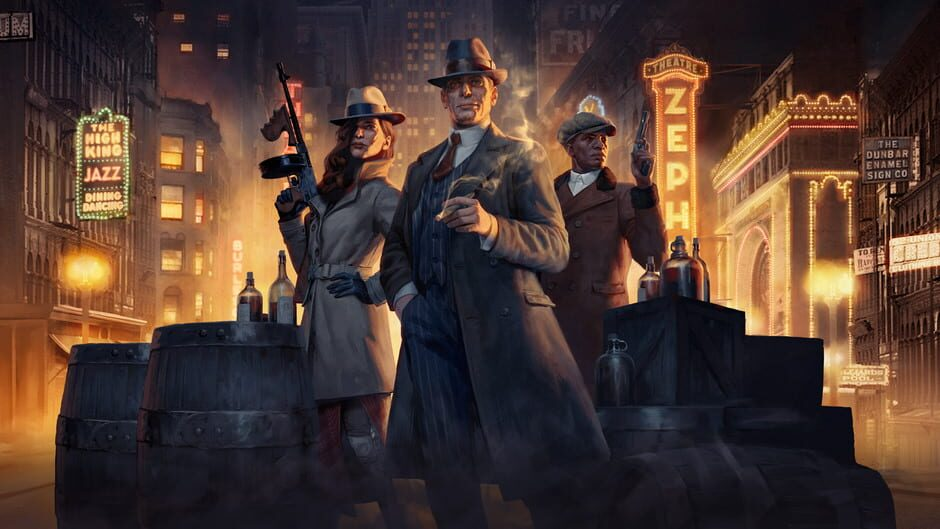 Empire of Sin lets players become a crime boss in prohibition-era Chicago during an underground war for control over the black market for booze. It’s a mishmash of different genres, lifting mechanics from other successful titles and combining them to make what is, on paper, an immensely intriguing game.

When you talk about Empire of Sin, you’re talking about two very different games: an empire builder and a turn-based tactical title. There’s also a complex RPG system beneath it all that allows for arising narratives to unfold, as well as a procedural dialogue system that drives the game’s conversations. 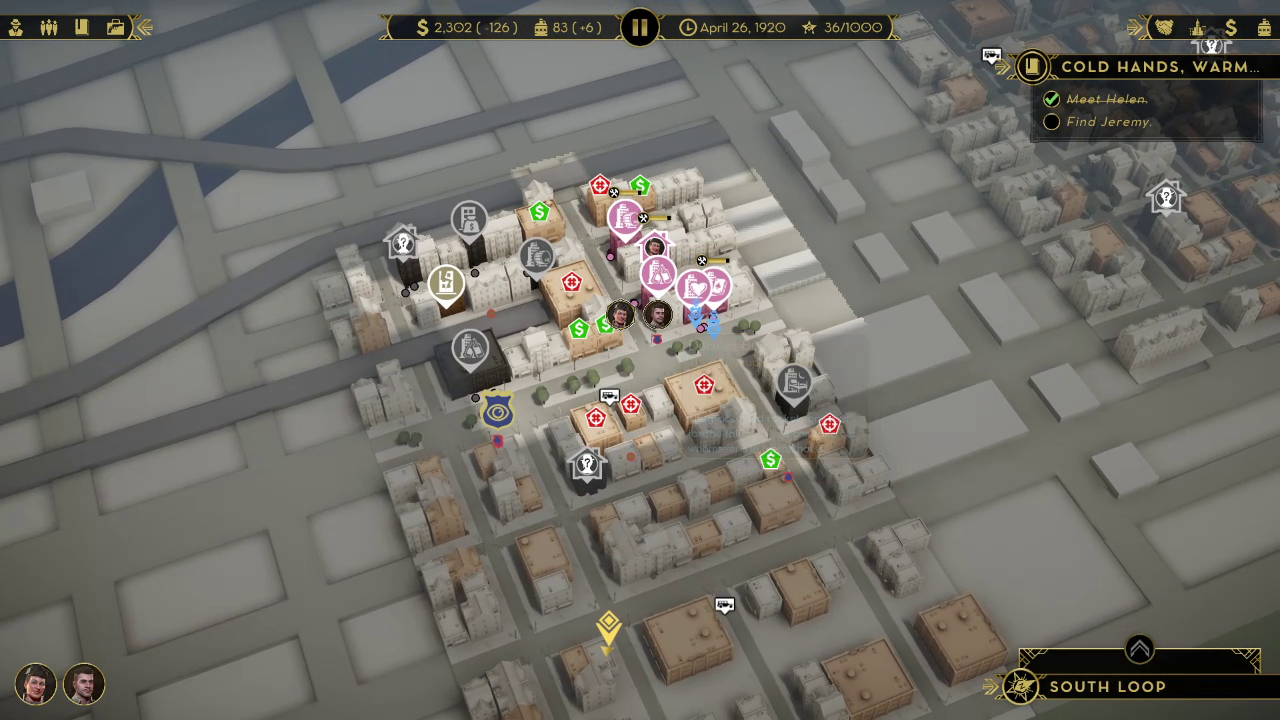 Most of your empire will be managed from this bird’s eye view of Chicago.

Your criminal empire is built and managed from several menus accessible from the overworld map of Chicago. The city is divided into several neighborhoods which act as isolated economic playgrounds for the player to exploit.

Neighborhoods each have their level of economic prosperity which influences the profitability of certain racket types as well as the type of spirit preferred by patrons. A lot of factors can affect an area’s prosperity, such as the severity and frequency of territory disputes — a hotly contested neighborhood in the middle of an all-out turf war will suffer economically.

Empire of Sin shines when it’s just you planning the expansion of your empire. Maximizing your profits is a sensitive balancing game of managing production with demand. Every action you take — whether it’s bribing a cop or having a sit-down with the head of a rival organization — has repercussions down the line that will inevitably force you to tweak the knobs and gears of your operation to stay ahead of the pack. 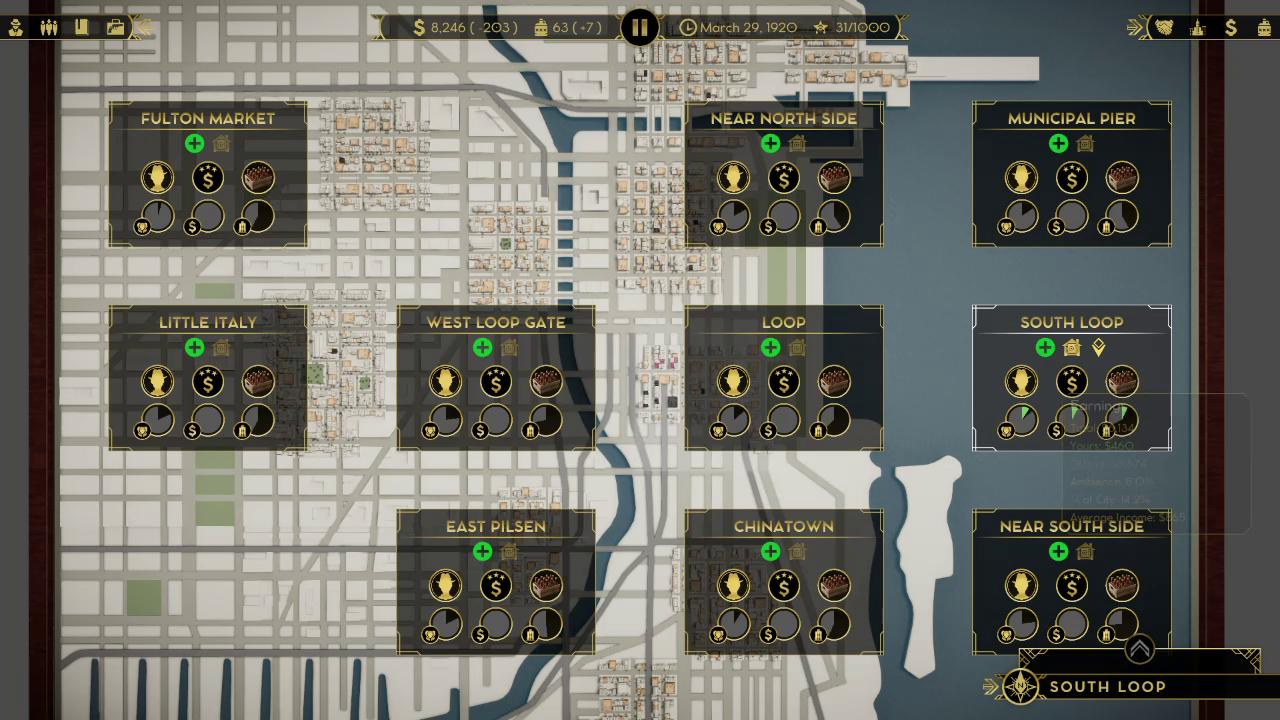 Rather annoyingly, the more powerful you become, the more time the game demands of you to complete simple, mundane tasks. You can assign your underlings to various roles in your enterprise, but there’s no real way to delegate jobs. As my empire grew and the number of businesses under my control increased, I found myself constantly interrupted by alerts notifying me of a location under attack. Having to personally deal with every issue that popped up made me feel less like a crime boss and more like a babysitter. 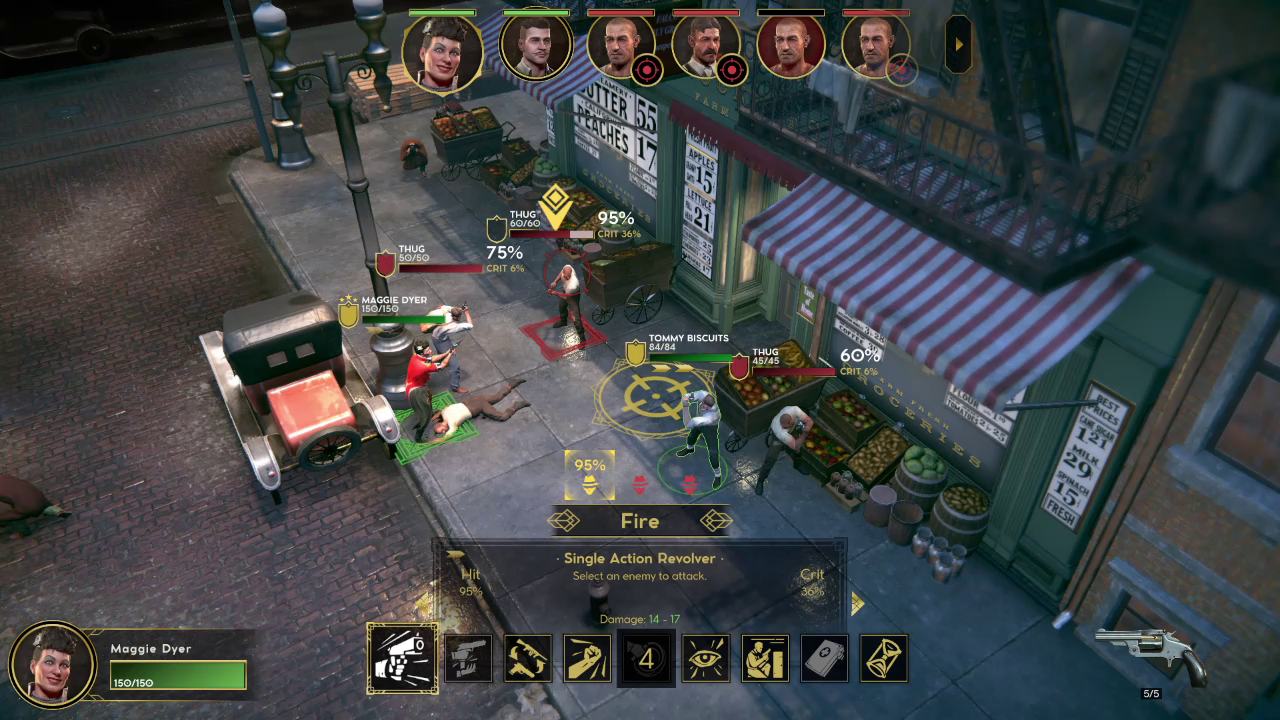 The second half of Empire of Sin is an XCOM-like turn-based tactical game. This is the side of Empire of Sin that was the focus of early impressions and trailers, but it’s by far the weaker of the two.

Combat is almost mechanically identical to XCOM, the only major difference being that turns are taken per character rather than per player as they are in XCOM — there’s no free switching between your characters here.

Maps are much smaller than they are in XCOM, which is frustrating as their move distance appears to be the same. This means characters can run across large portions of the play area in a single turn, making melee weapons disproportionately powerful. This also makes it frustrating to position your characters smartly — they all eventually wind up shooting at one another from near point-blank range.

Players have also complained of bugs in the game’s combat. I’ve run into a few myself — characters teleporting, animations playing at the wrong times — though none severe enough to take me out of the game for long (though I’m quite bug-tolerant in general). There’s still that classic issue from XCOM, where the hit percentages the game is showing you don’t exactly match up with what you’re seeing. Walls and objects also only disappear at a fixed distance from the camera, rather than contextually based on what units are behind them, so you frequently find yourself looking at something like this: 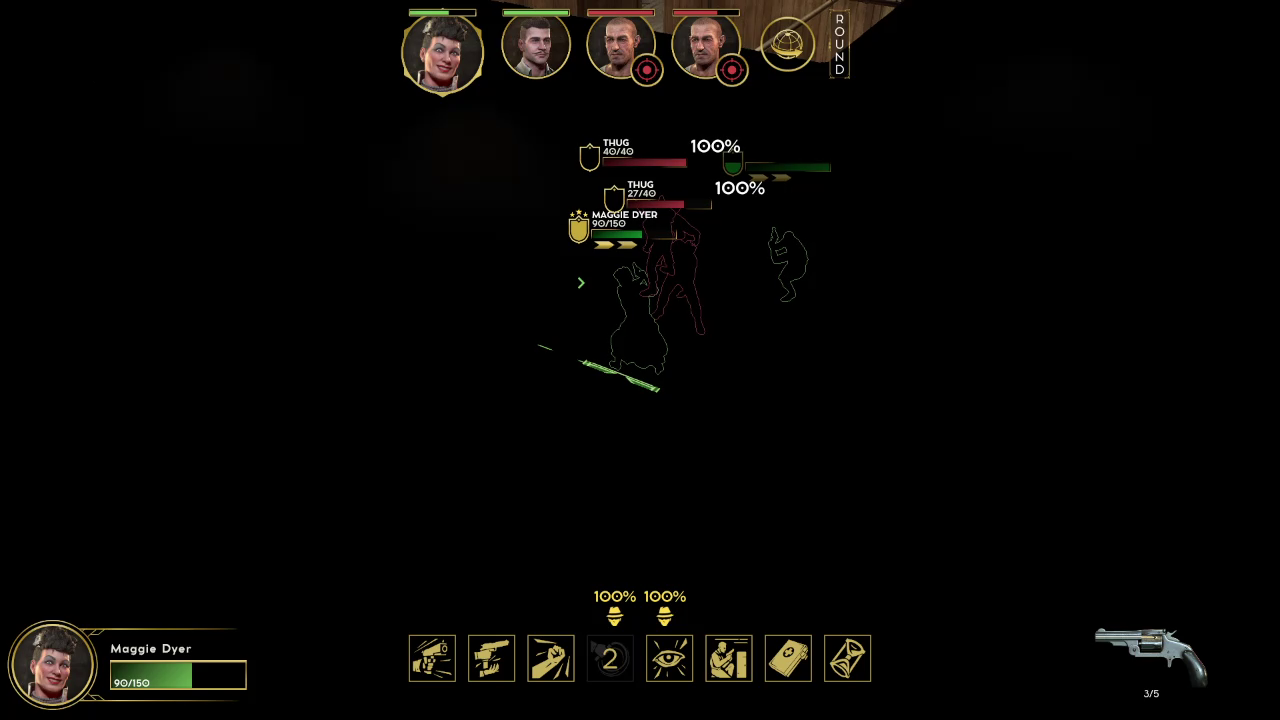 This is not a great way to play a tactical game.

To its credit, Empire of Sin at least lets you see the hit percentage at the location you’re highlighting so optimizing routes is much easier. Baby steps and all that.

Managing Your Crew (or Playing Matchmaker) 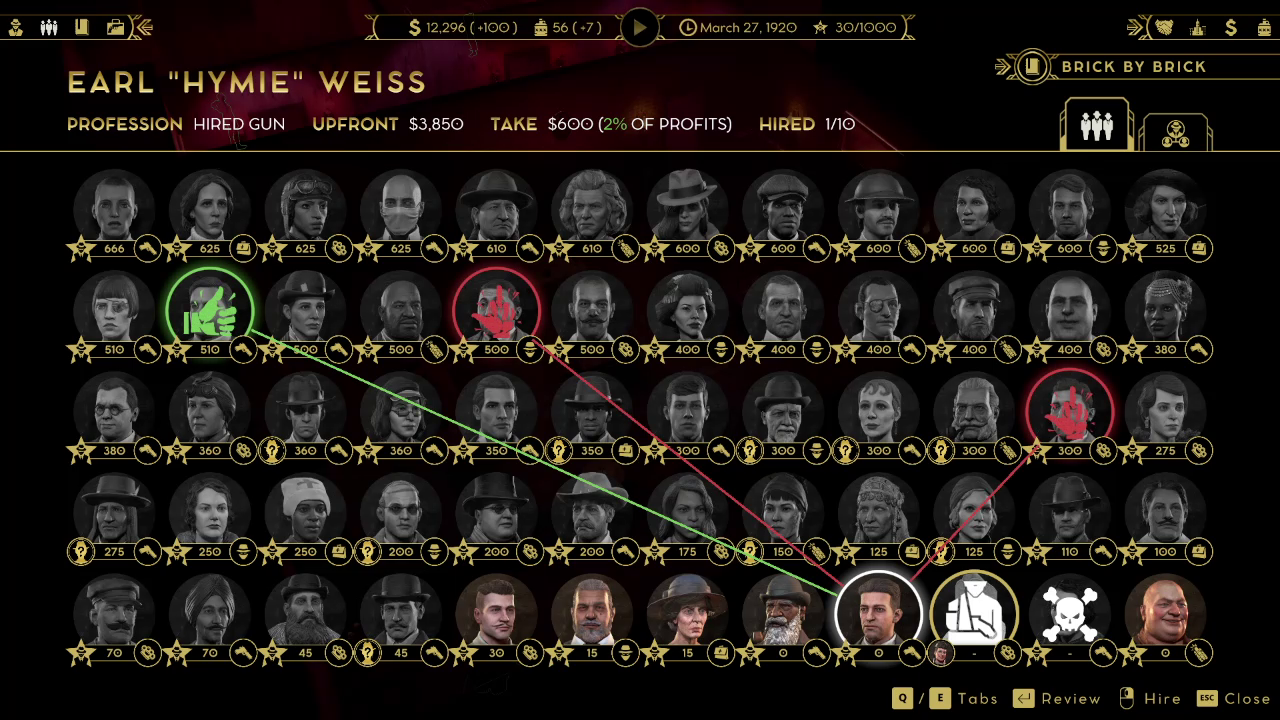 Empire of Sin takes the opposite approach with how it approaches characters and characterization. Unlike the squads in XCOM, which are a revolving door of randomly-generated characters with no background or personality, Empire of Sin only has a pool of 60 thugs that you can hire on and take into battle. Each thug is fully voiced with their own backgrounds and plotlines. Most importantly, each thug also relates to one or more of the other thugs in some way.

The relationships between your thugs is another element that you have to factor in when determining your lineup. You can even read about how they know one another and their history. For example, one of my thugs was the former lover of another who broke his heart, and now he wants nothing to do with her. There’s a fully-fleshed RPG system here, with individual statistics, strengths and weaknesses, the aforementioned relationships, and loadout customization. 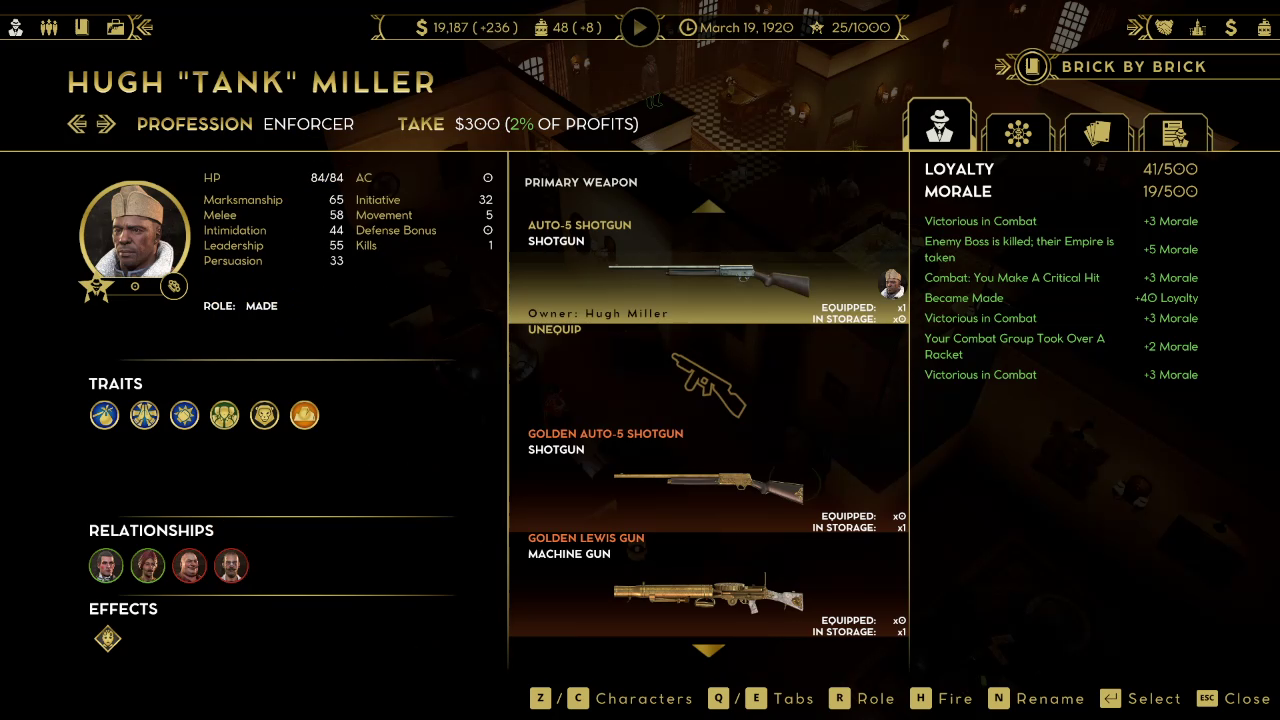 Crucially, all crime bosses pull from the same pool of hireable thugs, so gaining notoriety becomes very important if you want to get the characters with the best synergies. Depending on the nature of their relationships, a thug’s combat ability can be affected if they find themselves facing a scorned lover or a close friend. This is a mechanic that can make players lose hours of their game time too (in a good way). 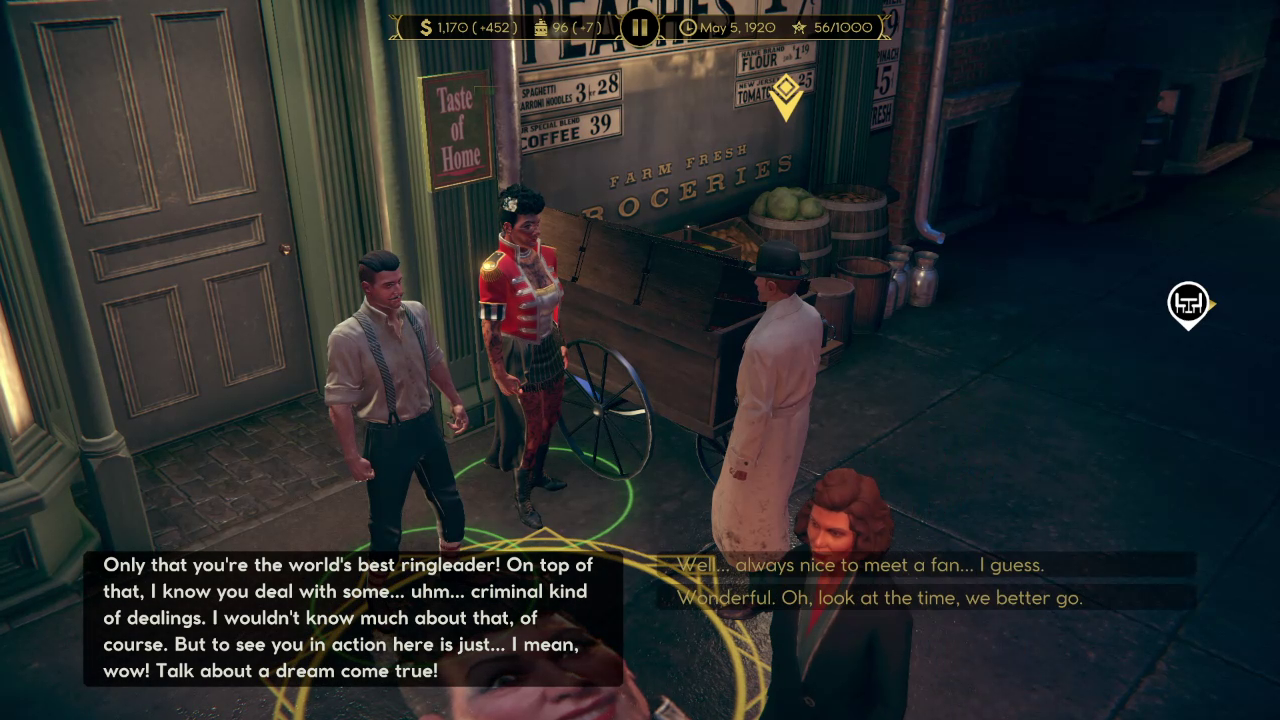 Every game begins with the player picking from several bosses via a Civilization-style character selection screen. Similarities to Civilization are more than skin deep — each crime boss has one or more passive buffs to a specific racket type (which always relates to their personal story).

All of this means more than simply making some enterprises more profitable for a certain character. Beneath the empire building and tactical combat, there’s also a character RPG system with a unique questline and narrative for each of the choosable crime bosses. It’s yet another spinning plate to balance alongside the profitability of your various enterprises and the relationships of your crew members. The rewards for completing quests are almost always worth it though, even if they’re not particularly fun or interesting (e.g. go to point A, then to point B, fight goons, back to point A).

Conversations with NPCs almost always involve a dialogue tree, though very rarely do your choices matter. The writing is good – those who like a good story will have a blast exploring their character’s main questline in Empire of Sin, and the straightforward, simplistic progression contrasts well with the open-ended, sandbox-ey design direction of the rest of the game. 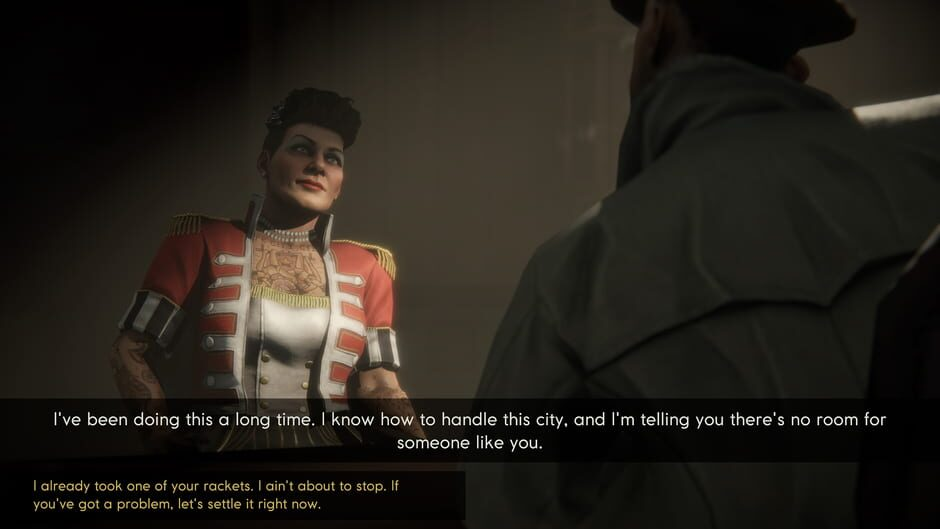 Conversations are much more interesting in the context of the ‘Sit Downs’, which is what the game calls one-on-one meetings with the head of another criminal organization. Romero Games claims that these are procedurally generated, though all sit-downs ultimately wind up with you either paying a sum of money, demanding a sum of money, escalating your rivalry, or doing nothing at all. It’s just a more stylish, more time-consuming reskinning of the Diplomacy mechanic in the Civilization series.

It may be about murder, inter-gang politics, and bootleg swill but Empire of Sin is unexpectedly bright and full of color; with splashes of pink, purple, and sky blue to accent the game’s black-and-gold art deco aesthetic. Characters fire guns, swing haymakers, and cut at one another to the off-beat rhythms and extravagant trumpet and sax solos of an unrelenting early-swing soundtrack.

It’s a strange contrast of subject matter and style, but it works because Empire of Sin doesn’t take itself too seriously. It’s filled with over-the-top accents, crazy stereotypes, and charming, larger-than-life characters that keep the mood light and fun despite the occasionally grim plotlines.

Empire of Sin is an incredibly ambitious combination of various game styles that feels like it’s almost there, like a smidge more polish and playtesting would have taken it to greatness. The various bugs, repetitive combat, readability issues, and poor balancing between its different elements hold it back. It doesn’t quite live up to its potential, but there’s a very solid foundation here for future improvement, either through patches or a sequel.