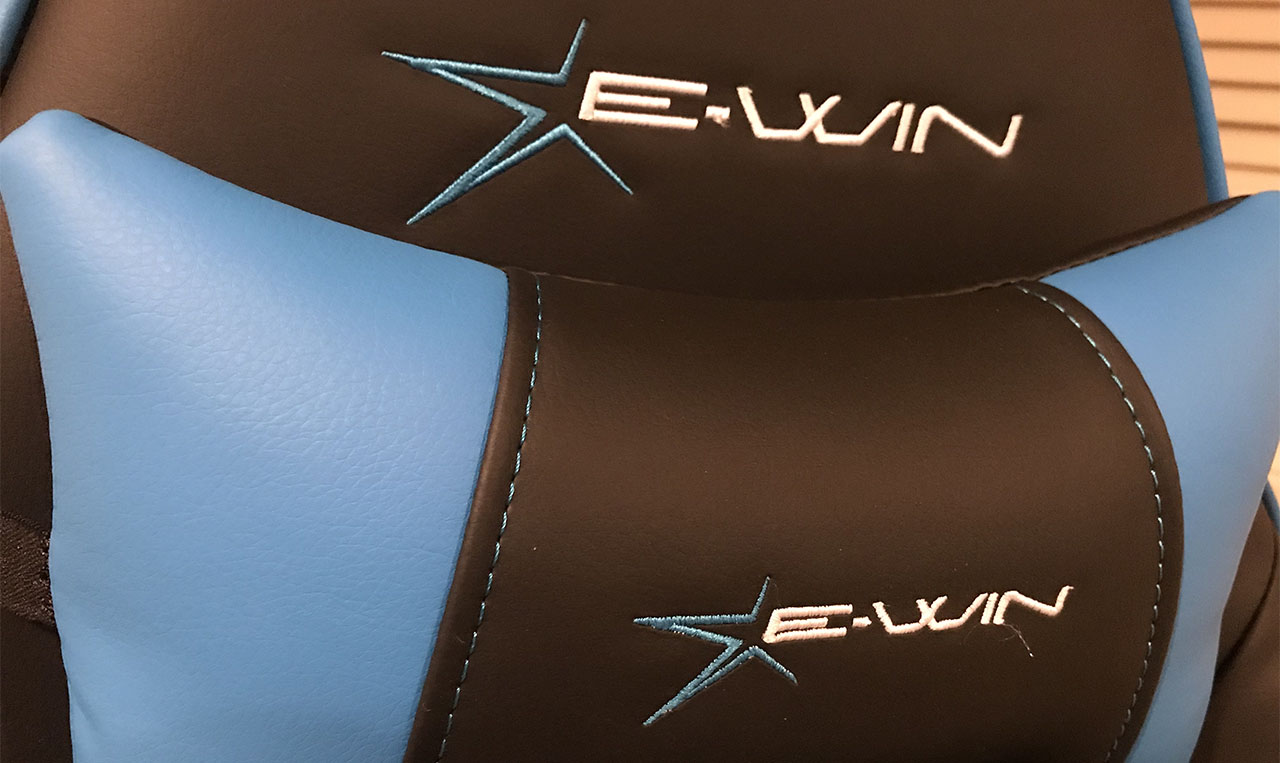 EwinRacing Gaming Chairs reached out to Gigamax Games requesting a review on their Knight Series gaming chairs. They offered no monetary compensation and genuinely seemed as though they were interested in honest unadulterated feedback. After Mack spent a couple of weekends testing the gaming chair, this was his impression.

I am a console gamer that feels at home surrounded by pillows, blankets, and in front of a big TV a foot away from my face. The idea of a gaming chair was a little intimidating. After looking into the gaming chair EwinRacing wanted to send, that nervousness subsided a bit. It looked cool, loved the blue and black color scheme, and after recently hurting my neck the thought of sitting upright and not sinking into a couch was euphoric.

The package arrived only a couple of days after I was notified it was shipped. Secretly, I was hoping it would come magically assembled, but that was more a testament to my lack of faith when it came to my handiness. Opening up the large package took me back a bit. I envisioned a mess of chair parts, screws, and strange components lying scattered around the box. What I received, however, was a neatly organized, logically segmented box filled with all the parts I need to assemble my very own gaming chair. 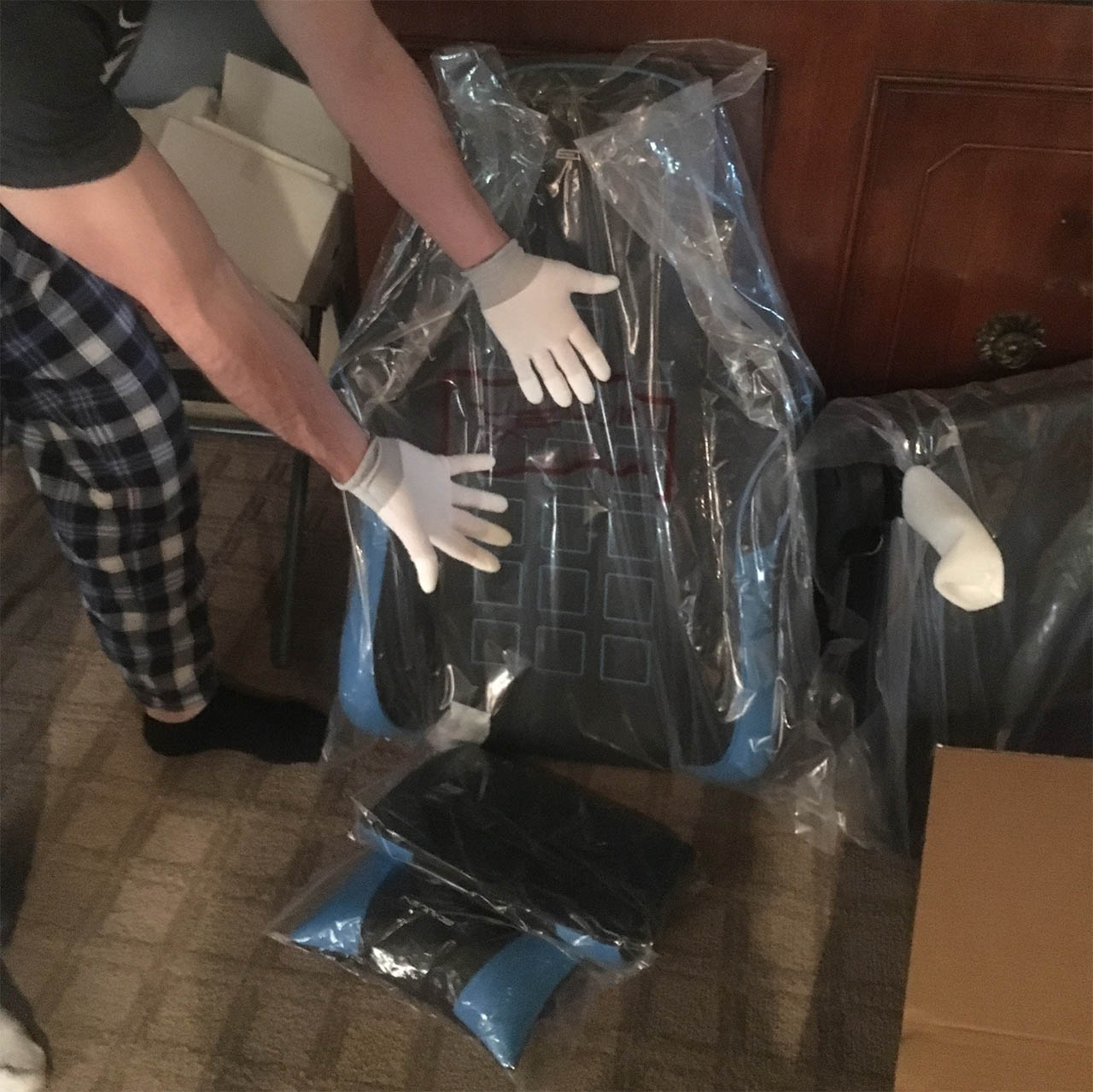 Still, I wasn’t thrilled there was a task to accomplish before I was able to get to gaming. Immediately my girlfriend and I began working to put together this piece of gaming equipment. She was on instructions and I was on assembly. The first step was to remove all the plastic from the major pieces, backrest, seat, and armrests. After an interesting few minutes of wrestling with plastic, it was time to dive in. Suddenly I was stopped in my tracks. She interrupted my eagerness by throwing a pair of gloves at me. I was perplexed. Why did they include gloves? Why were the instructions so insistent on me using said gloves? But they looked funny so I rolled with it.

Soon it became clear why these gloves came into play. There were very few sections throughout the assembly where you were asked to unscrew and re-screw some bolts. It was relatively easy and all the parts matched up beautifully but each bolt was heavily greased. The gloves allowed me to grip the bolts and avoid having grease stains on my hands for the rest of the weekend. It was a fantastic addition to the assembly kit. 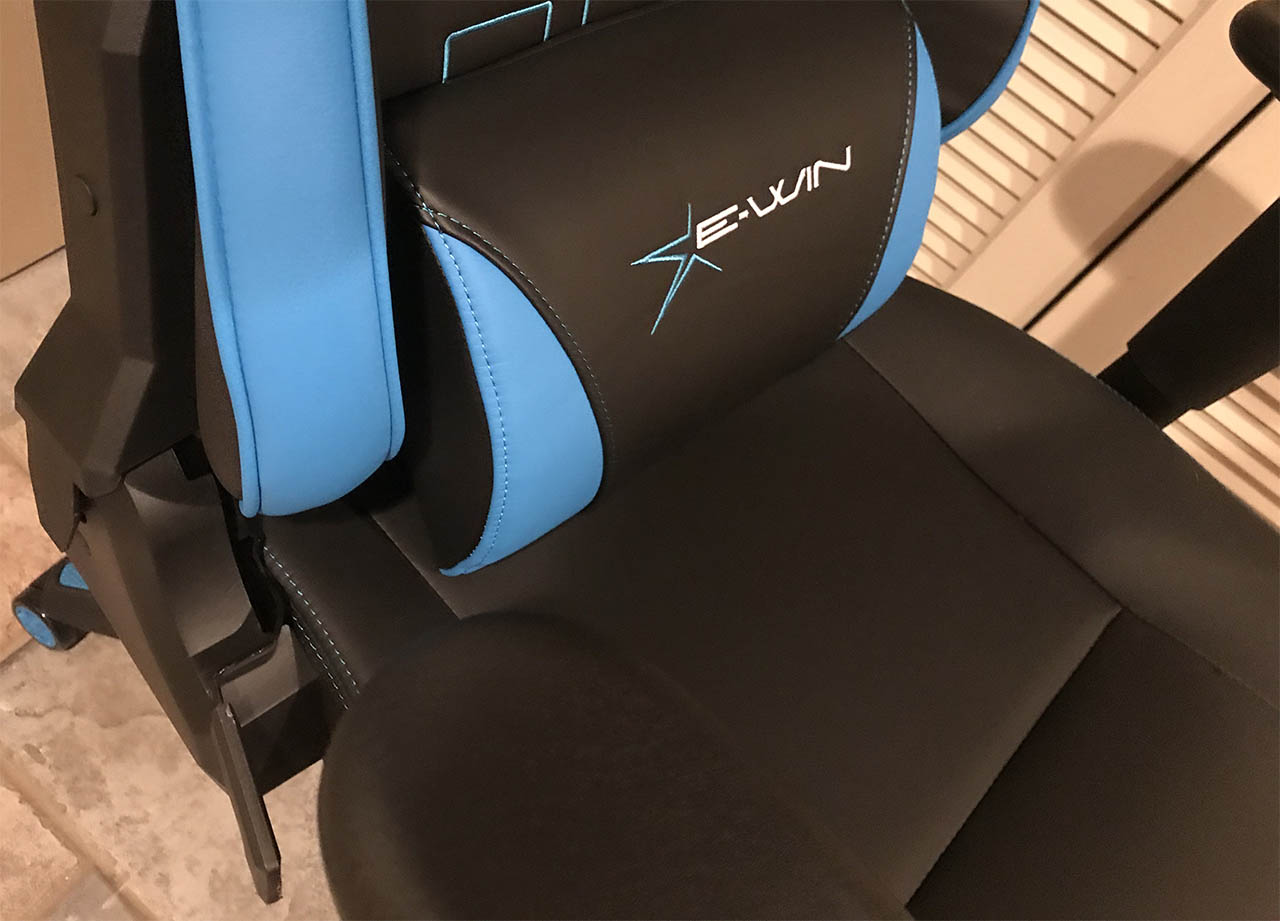 Many of the parts just snapped together. The Hex Key was the only tool needed and that was included. It even came with spare parts that were labeled “spare parts” so you knew you weren’t accidentally leaving out critical components. There wasn’t much work that was needed in terms of the Hex Key and the step-by-step instructions were clear and easy to follow. Assembly took about an hour and a half in total. Some of that was spent joking around, watching stand up comedy, and not paying attention to the instructions that were being given. I was dreading assembling this chair for days but it came together without a single argument or headache.

After the EwinRacing gaming chair was assembled, it was time to look back and see the fruits of our labor. It was a great looking chair. There’s no doubt about the design being ergonomically correct. The sleek lines and vibrant blue and deep black with just a dash of the EwinRacing logo was gorgeous.

A few seconds of enjoying the sight, I hopped on to see how it felt. It was apparent this was no cheap Staples office chair. This was a solid piece of gaming equipment. The chair even rolled well on carpet. Everything about the chair felt like it was designed for a person to spend long periods in one position and remain comfortable.

A Full Day of Gaming

There was no doubt a learning curve when it came to gaming in a chair. That was embarrassing to write but it was the absolute truth. I knew that it was better for my back but I just didn’t feel “comfortable”. I say “comfortable” because it was a different kind of comfort than what I was accustomed to. Instead of being surrounded by fluffy pillows, a cat or two, and enough blankets to build a fort, I was sitting upright and without back or neck pain.

An entire day was set aside for gaming. Strategically placed water cups and meals were located around my gaming setup to limit movement. It was on. The day was here to put countless consecutive hours on my ass and see what all the fuss was about gaming on these relatively expensive chairs. 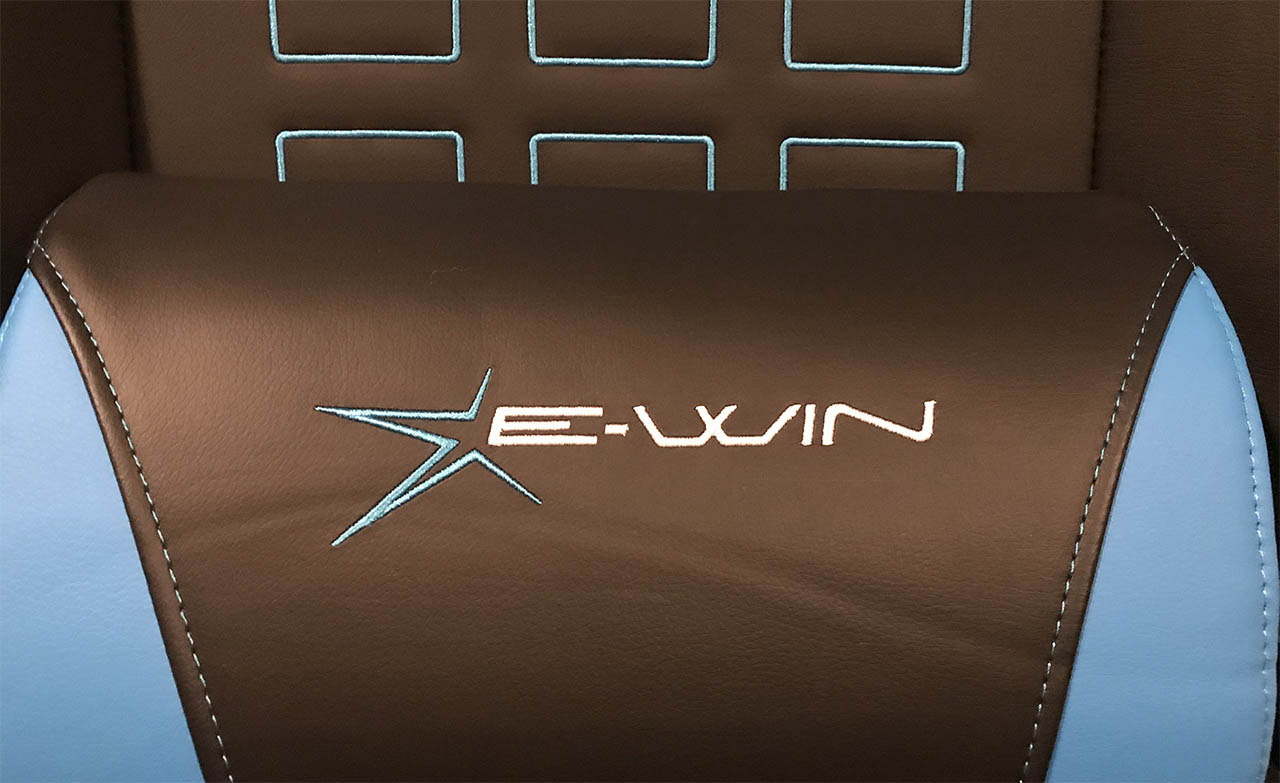 In just two hours it became clear why people are extremely enthusiastic about high-quality gaming chairs. The seat was soft yet firm, the adjustable neck pillow is easily repositioned for maximum comfort, the loose lumbar support pillow and height-adjustable arms rests were the perfect additions to make the entire chair feel like it conformed to your body added up to a mind-blowing experience. Never thought I’d describe sitting in a chair as mind-blowing, but it thoroughly delivered a higher-level gaming experience.

I wasn’t forced to constantly change positions. The adjustable height and recline feature allowed for quick controllable adjustments without needing to stack pillows and stretch out my damaged backbone. But the obvious benefits showed themselves after spending over ten plus hours in the chair.

Of course, there were times I had to get up to use the bathroom. Couldn’t swing a Cartman move from the World of Warcraft episode. And eventually, my water cups ran dry.

After 10+ hours of gaming, sitting upright, my back and neck felt phenomenal but I wanted to lean forward a bit. I was getting wrecked in Iron Banner and felt like I needed to get into gaming mode. A majority of the day was spent playing single-player games so this need never really came up. Leaning forward, the entire chair swiveled forward as if it understood what I wanted to do. Placing my elbows to my knees became uncomfortable, fast. I was at a loss. It almost seemed like it was going to support my body perfectly but this just wasn’t doing it for me. Nearly a second after that thought, it dawned on me, “the lumbar pillow!”. I reached around to the back and placed the lumbar pillow on my legs and rested my elbows upon it. There it was. A perfect forward-leaning position and the EwinRacing gaming chair had all the components to bring it together.

After a full weekend of gaming, out of my comfort zone, sitting upright in a chair, I was sold. All the subtle little add-ons like the adjustable pillows, forward-lean (gamer mode) support and the versatility of the lumbar pillow, and the incredibly smooth-rolling wheels even on the old carpet were just icing on the cake. The substance of the chair, a firm yet soft, solid yet not overly bulky design, and sleek color scheme all made for a fantastic addition to my gaming setup. Unfortunately, I’ll need to say goodbye soon. The EwinRacing Gaming chair will be given to our featured streamer, SolidTony as a gift for his support and continued growth as a Twitch streamer. However, I sold myself. I’ll be picking up another for my personal use.

I want to reiterate. EwinRacing did not provide monetary compensation for this review. The chair was fantastic and it was the first time I gamed an entire weekend without back or neck pain. Even writing this review in my bed, I realize I should have written this sitting on the chair.