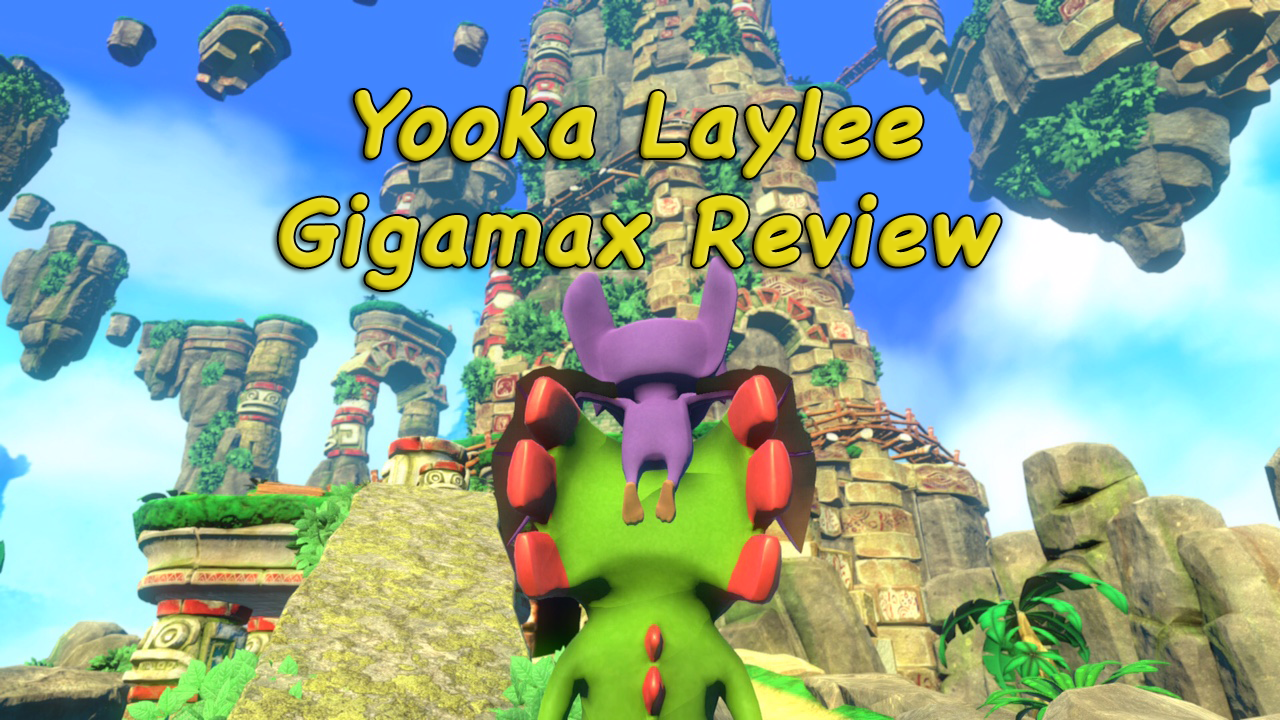 It is hard to express how much I love Yooka-Laylee but stand by while I give it a go. This platformer is an affordable foray into a beautiful universe with plenty of challenge and collectibles. The $40 price tag offers even more incentive to try it out. Each world provides players with a new experience, all while keeping players entertained with clever dialogue and interesting characters. To top off this nostalgic gut punch, Playtonic Games included a delightful soundtrack that will make Banjo-Kazooie veterans flashback to their N64 days. 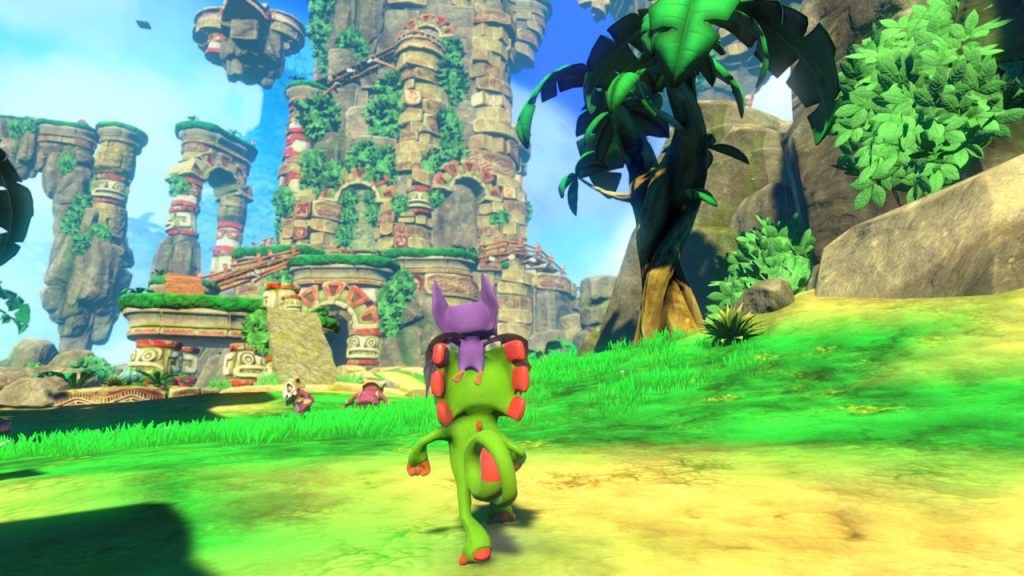 To address the elephant in the room, yes Yooka-Laylee does feel nearly identical to Banjo-Kazooie. This is mainly because the developers working at Playtonic Games are industry veterans that were the brains behind the bear and the bird most gamers remember. These similarities are not a bad thing though, in fact they add to the allure of the game. The controls are fluid, Yooka runs and jumps with grace just like Banjo. Jumping from platform to platform feels great and the only thing that ever got in the way was an occasional camera glitch.

Fluidity is essential due to the pallet of skills at your heroes disposal. Throughout the adventure both Yooka and Laylee will learn tons of moves used for moving, flying and fighting their way to victory. From the start players are limited in terms of skills, only having access to run and jump. After a minor introduction, attack is unlocked and the game opens up. Players are then introduced to the move acquisition system. Instead of just being handed moves, a smooth talking snake will trade abilities for quills. Although the price seems steep, quills are in no short supply as they are one of the more prevalent collectables. 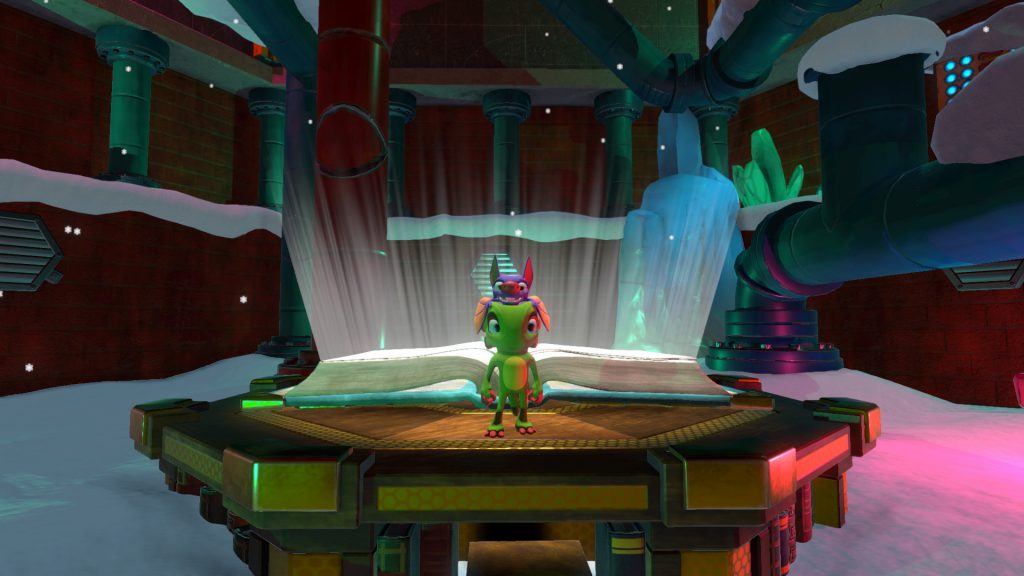 Yooka-Laylee is a collect-a-thon that just keeps giving. Players have a constant stream of various quills, pagies, ghost writers, tonics and various other objects necessary for reaching the end of the game. Not all of these items are easy to obtain as many are hidden behind various puzzles and fights which Yooka must take care of first. These puzzles aren’t always easy, some require quick reflexes and clever problem solving. One of the more challenging problems require players to answer a series of 10 questions that are necessary for progression. These questions seem easy at first, but as the list goes on very specific questions are asked, such as “how many hours have you been playing the game.” By the way, these were all asked by a talking duck in a rolling fish tank.

The delightful cast of characters is one of the many driving forces Yooka-Laylee uses to keep players attentions. A constant feeling of anticipation is felt when traveling into the many worlds, brought on by new faces and self aware dialogue. The antagonist of the game comes in the form of an arrogant bee known as Capital B. Puns, plays on words and destroying the 4th wall are what the game does best. The snarky dialogue between the two heroes is endearing and while Capital B’s dialogue will never match the wit of Gruntilda (the antagonist from Banjo-Kazooie) he still has some funny lines that take a jab at corporate culture. Characters also make the iconic goofy mumbling noises made famous by Playtonic Games previous franchise. 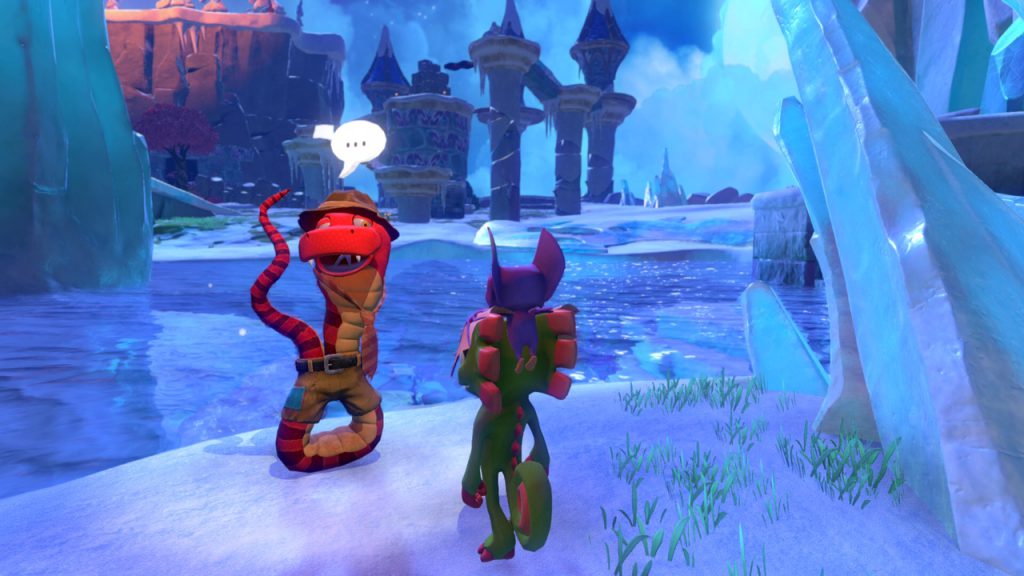 These characters are spread throughout a variety of gorgeous environments accessed by jumping into magical story books that have been stolen by Capital B. Players start on a busted up pirate ship that Yooka and Laylee call a home and move onto the main hub world known as the Hivory Towers. This is where you’ll find the world bending books, starting with the jungle level, Tribalstack Tropics. Players will move onto various other whimsical areas such as a frozen tundra and a flashy casino. Although there are only 5 zones, they each have two versions that require players to expand the world in order to grab all the collectables. When expanded, the books contain new challenges to take on and introduce more characters to meet.

An arcade like multiplayer is included as well. It lets friends compete against each other in various mini game activities. These are fun diversions from the story but ultimately they feel a little forced but ultimately don’t detract from the excellence that is the campaign. 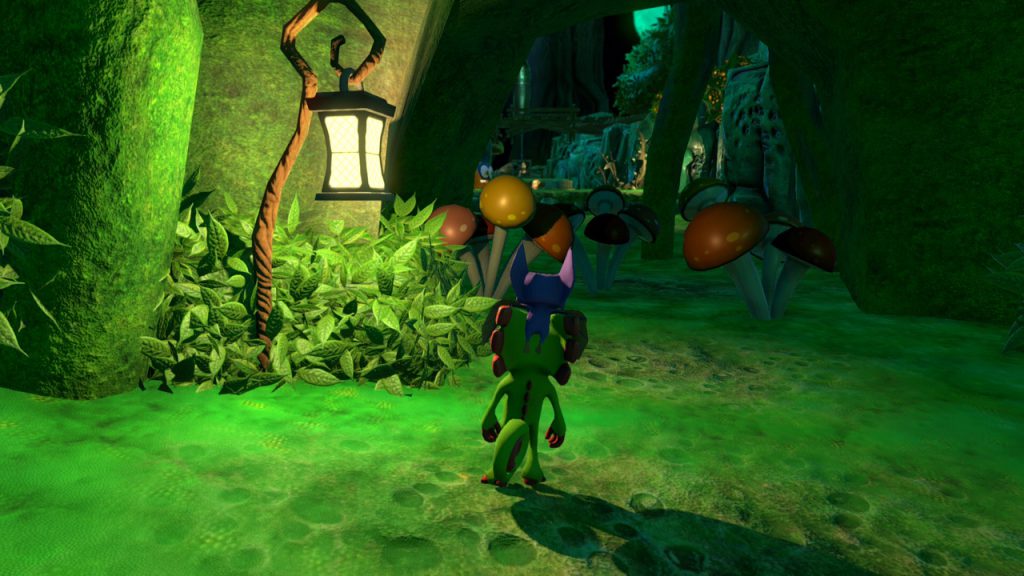 Yooka-Laylee is a truly wonderful experience that is a must buy for anyone who enjoyed Banjo-Kazooie or any retro platformer. This indie game is a Kickstarter success story that shows the true power of the platform and independent developers. Hopefully it inspires more small time game developers to go against the grain and develop outside industry norms.

Gigamax Games is dedicated to giving our fans a look at all the latest games and industry updates. Make sure to stay tuned for more early previews and reviews and if you’d like to see some gameplay of Yooka-Laylee make sure to check out our sneak peek let’s play below.