Arkane Studios’ highly anticipated first-person shooter, Prey releases on May 5th. Those excited to give the game a try won’t have to wait to try it out. Yesterday, 4/27/2017 a free download,  “Prey Demo: Opening Hour’ was made available on PlayStation 4 and Xbox One. Unfortunately for PC gamers, the demo is console exclusive however the full game will be 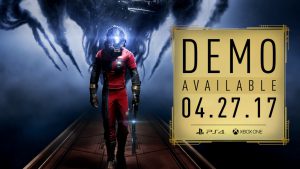 available on PC on May 5th.

The demo will be 13.6 GB PS4 and 13.1 GB Xbox One. Fans will be able to seamlessly play the entire first hour. When it comes to Prey, the first hour holds a host of surprises. The demo offers a choice to play as either the male or female main character, Morgan Yu. This could be a great way for players to try each character in a manageable, one hour bite.  Gamers can see which character they want to use for their maiden play through.

“There’s something intense and effective about that first hour that you’ll lose if you read too much about it,” Polygon wrote in an article released back in February (http://bit.ly/2qbLTtW). This is an accurate statement as the first hour is filled with important twists and turns. If you’re a gamer that wants to dive into Prey with a blank slate and doesn’t want any idea of what you’re getting into, skip the video at the bottom.

Developer Arkane Studio’s, best known for their hit classics Dishonored and Dishonored 2, Prey has the community excited. Fans of the original 2006 Prey title are extremely pleased to see a reboot. The game makes the player question reality and the enemies create an environment where anything can attack you at any time. For a deeper look into what Prey is all about, take a look at our first look at this highly anticipated FPS.

Below is the first 45 minutes of gameplay (spoiler warning) through the eyes as the male Morgan Yu.