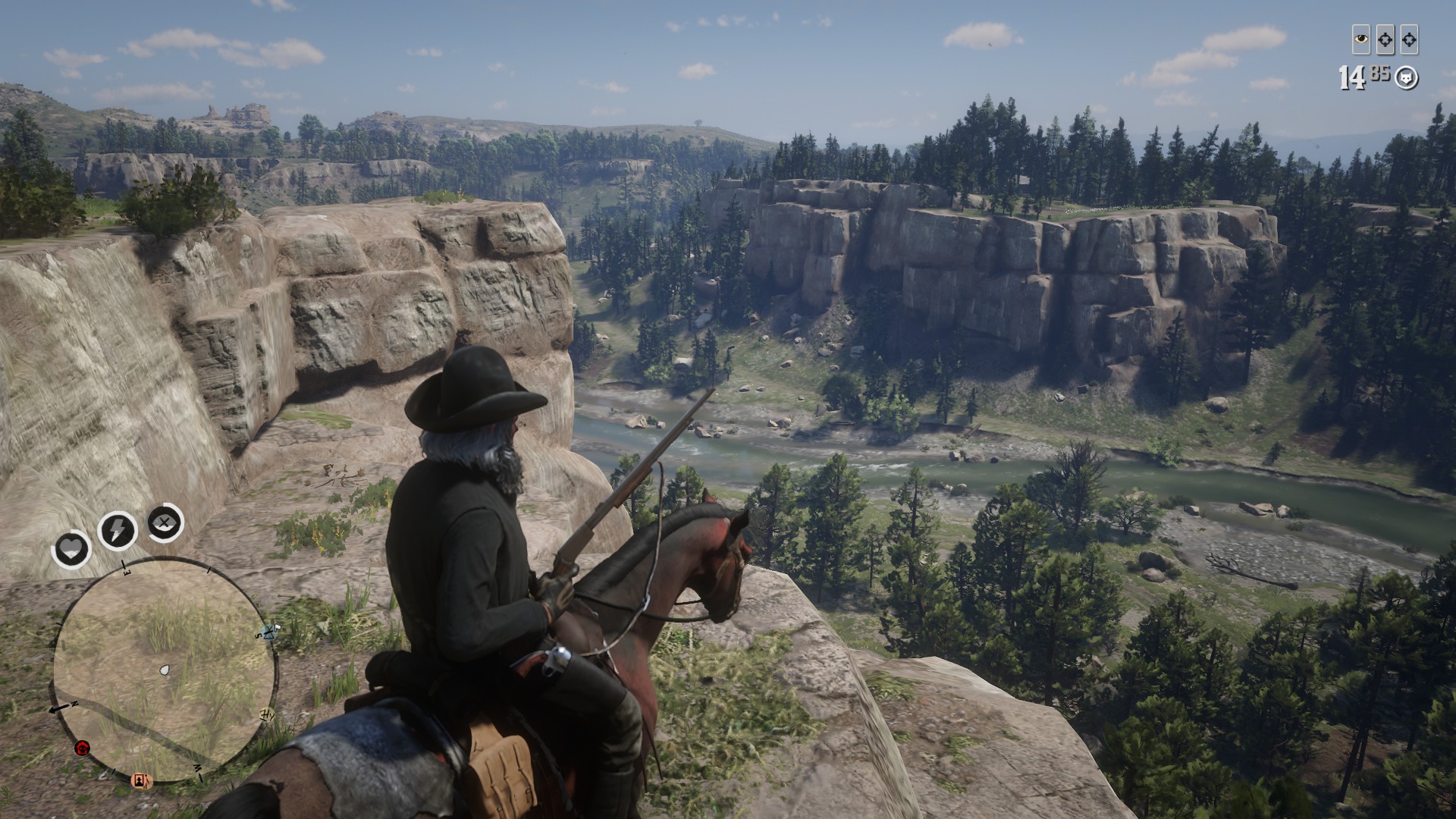 I never played the first Red Dead Redemption or Red Dead Revolver so I didn’t really know anything about the game/series besides the oversimplification that it’s “GTA: Cowboy Edition”. I still haven’t played the single-player campaign and I got into the game a bit late. It was released in November of 2019 and I picked it up in February 2020, got mad at it due to connectivity issues and didn’t play again until March when I hurt my back and was unable to go to my day job. As of this writing, I have 121 hours playing time on Red Dead Redemption 2: Online, to say that I am enjoying my time would be an understatement.

Rockstar has done an amazing job with the game world. RDR2 is fucking gorgeous. The level of detail for the terrain and the little hamlets that dot the landscape is amazing. Seriously, look at this shit:

NOT EVEN RUNNING IT ON ULTRA! 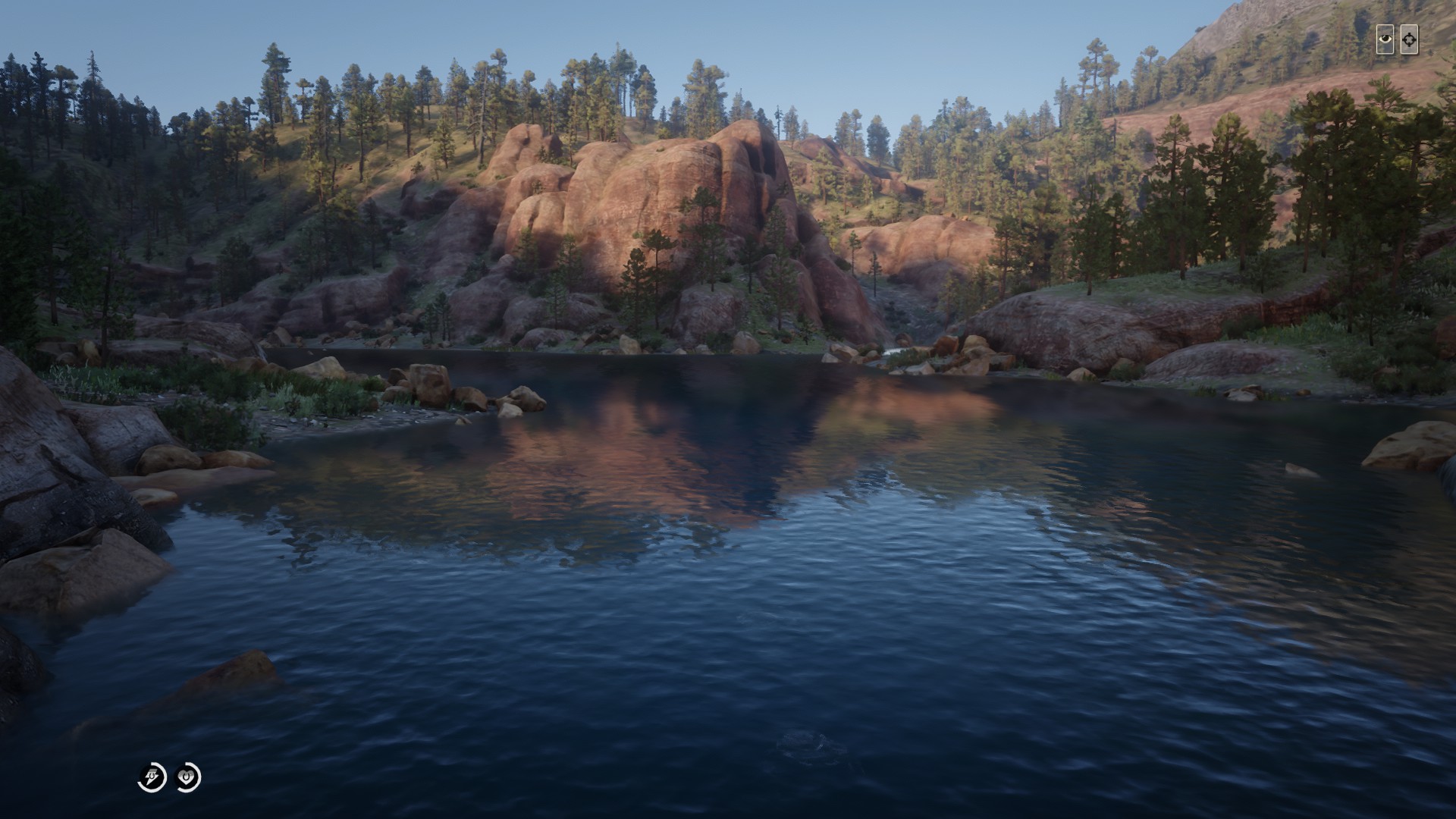 The behavior of the animals is absolutely fantastic and incredibly realistic. When you get a “wounding” shot on an animal it bleats/whines pitifully until it bleeds out or you mercy kill it.

The NPC behavior is adequate, but the dialog is limited to the NPC making comments about your character/things your character is doing/riding. Quite frankly, outside of the shopkeepers, the interactivity is minimalistic to put it nicely, lackluster and lazy to put it bluntly. My friends tell me that the NPCs in the single-player game are a fair bit more dynamic, and I can’t think of a reason why Rockstar would choose to limit their interactivity in the Online segment. I can understand them having a lower volume of NPCs as some players have really shitty computers.

At its’ heart, Red Dead Redemption 2: Online is an open world old west sandbox game. There are four roles to choose from: Bounty Hunter, Trader, Collector, and Moonshiner (The newest one).

You can choose one or all of them. So far I’ve unlocked the Bounty Hunter and the Collector Role. Bounty Hunting is fun, the Collector stuff just sorta happens. I guess you could actively try to find the items that are needed for it, but you come across them quite frequently just from playing the game so it really isn’t needed to progress that role unless you want to grind it.

There’s a short multiplayer campaign(played best with some friends on discord), a variety of “Stranger” missions which get really really repetitive after a while, and a selection of matchmade PVP modes that I’ve barely touched. The area that I have spent most of my time in Free Mode where the vast majority of the content is player-driven, that is, you find your own fun. I have spent literal hours hunting in the Grizzlies in Amborino and in The Heartlands of New Hanover.

I guess the biggest issue with RDR2O(barring the connectivity issues, which are so bad that people are making games that mimic the phenomena) is the lack of communication from Rockstar themselves about where they are taking the game. There’s a huge problem with cheaters using mod menus on the PC version to ruin lobbies(just like they did in GTA: Online), there’s a huge problem with people using lag switches and duping items on the console version.

Supposedly there’s more content in the pipes for RDR2Online, which is great because the game has tremendous potential, but I’m hoping there’s still a community left to enjoy it when it is released as there’s a mounting level of frustration amongst the various player bases due to the disconnects, rubber banding, people not getting compensated for group missions, unconscious bounties counting as “dead”, a relatively empty game world even with all the NPCs in it. Players are leaving in droves.

I’m not going anywhere, but I am getting frustrated by some of the questionable design choices and the unintuitive menu/UI navigation. It took my friends and me about 20 minutes to figure out how to create a posse and invite someone to it, hell, I’m sitting at over 100 hours and I just figured out that you can replay missions through the “Progress” sub-menu on the “Pause” menu.

It would make more sense for the story missions to show up on the map again after you’ve completed them all with an option to hide completely missions should you so choose rather than burying the ability to replay them in three menus(Esc -> Progress -> Story).

Here is hoping that Rockstar is a bit more forthcoming with their plans for RDROnline, because right now it is starting to feel like it is going to end up as abandonware.