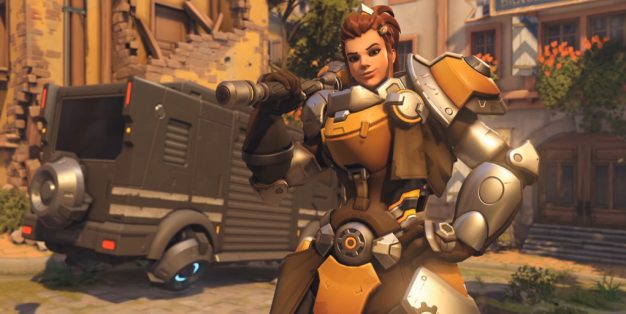 The 27th Overwatch hero, Brigitte is heading to all platforms including PS4, Xbox One, and PC on March 20th. Blizzard announced this exciting news today (3/15/18) on Twitter along with an announcement post on their blog. Players that own a PC and want to try her right now, she is currently available on the Public Test Realm.

Blizzard is calling the new hero an “engineer with peerless armor constructing abilities,” and she definitely shows her prowess when deployed on the battlefield. Her primary weapon is known as the Rocket Flail, which extends when used and can hit multiple heroes at the same time.

Along with Brigitte’s flail, she also gets a deployable Barrier Shield, which like Reinhardt can protect allies immediately behind her. She also has the ability to throw Repair Packs to heal teammates, while her passive ability, Inspire, heals all nearby allies when she deals DPS.

Blizzard Picks Up The Pace

Brigitte was officially announced by Blizzard only a couple of weeks ago and right beforehand they revealed a lore database that will host content revealing the backstory of many of their popular heroes. To start Blizzard gave some more insight into how Torbjörn lost his arm in a tear jerking letter to his wife. With the new heroes imminent arrival, we’ll be sure to show her off in action the day she becomes available to the public, so don’t forget to check out our Stream Page so you know exactly when you’ll have a chance to see this exciting new hero!