Devil May Cry 4 came out a decade ago and fans are finally getting a true sequel after 10 long years. Microsoft revealed during their E3 2018 press conference that Devil May Cry 5 will hit consoles and PC in spring of 2019. Along with the big reveal and release date announcement, the company offered fans a look into what the latest iteration of the series is all about.

As shown in the trailer above, Devil May Cry 5 plans on featuring more of the slick and stylish combat system rather than the hack and slash style that comes to mind when thinking about Devil May Cry. The director of the game, Hideaki Itsuno, walked on stage to speak about Capcom’s efforts to improve both the combat and controls of the beloved series. All of the game’s development is being handled internally at Capcom and as the trailer showed, Nero will be making his way back into the game with his trusty sword, Red Queen from Devil May Cry 4.

Get Ready To Be Impressed

Capcom also stated that the studio is working around the clock to create world-class visuals that are sure to impress both long-time fans and newcomers alike. Itsuno also pointed out that Devil May Cry 5 is a true sequel to the last numbered game in the series and is the best action experience Capcom has developed yet. 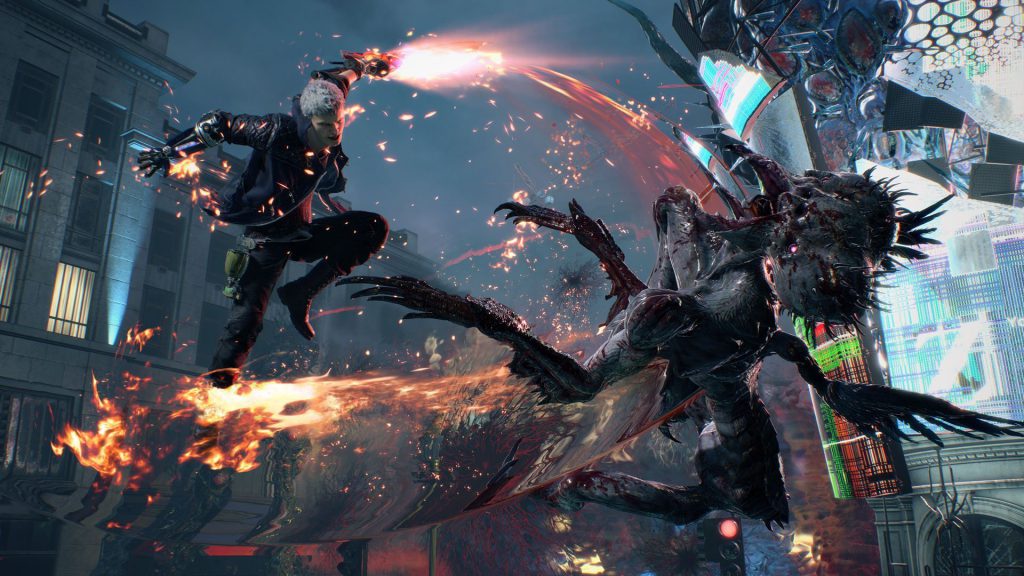 In a press release that came out after the press conference, Capcom revealed more details on the upcoming action game. “A brand-new entry in the legendary over-the-top action series comes to Xbox One in spring 2019, complete with its signature blend of high-octane stylized action and otherworldly and original characters the series is known for. Years have passed since the legions of hell have set foot in this world, but now a new demonic invasion has begun, and humanity’s last hope will rest in the hands of three lone demon hunters, each offering a radically different play style. United by fate and a thirst for vengeance, these demon hunters will have to face their demons if they hope to survive. The devil you know returns in the most over the top, technically advanced, utterly insane action experience of this generation.” (https://bit.ly/2sYj72R)

Be sure to keep checking back on GigamaxGames.com to stay up to date with all the biggest announcements from E3 2018. There was so much gaming news to break during this massive conference. What games are you most excited to play? Let the Gigamax crew know in the comments below!