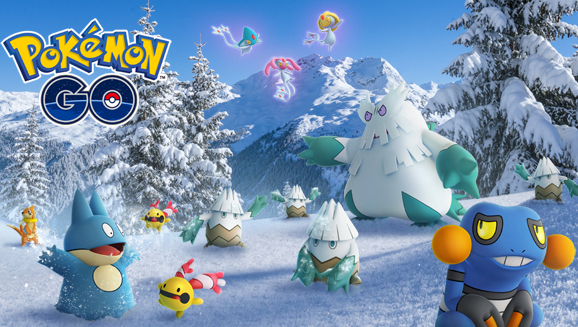 Niantic officially revealed their plans for Pokemon Go’s seasonal winter event. The celebration begins this Tuesday (12/18/18) and will run into 2019. While the event is active players will be able to earn special bonuses, hatch eggs faster, and encounter Sinnoh based Pokemon more often.

Pokemon Go Does It Again!

This is the third year in a row Niantic is holding this snowy event and like the years before, it will feature a special Pikachu wearing a unique hat. Along with the unique electric type, Niantic says more ice types and generation 4 Pokemon will appear. The promotional art for the event includes some Pokemon like Snover, Abomasnow, Muchlax, Chingling, and Croagunk.

The image also features three legendary monsters from the Sinnoh region Azelf, Uxie, and Mesprit, suggesting that the trio will also enter the mobile hit during the event. Finally, Niantic has also announced that Delibird will be available along with its shiny form.

On top of all the new Pokemon making their way into the game, the app will feature a bunch of new bonuses for players to achieve. Each of these will be distributed every couple of days, from December 18th-22nd, trainers will earn twice as much candy for catching and transferring Pokemon; from the 22nd-26th, they’ll receive double the amount of stardust for catching monsters; from the 26th-30th, players will receive double the experience for catching Pokemon; lastly from the 30th to the last day of the event January 2nd, incubators will hatch eggs twice as fast.

The final bonus Niantic is offering during the event is a guaranteed incubator for a trainer’s first photo-disk spin of the day. The mobile game developer also said that an increased amount of Pokemon that will hatch from 7km eggs and trainers have an increased chance of hatching the monsters Smoochum or Azurill.

Those interested in learning more about the Pokemon Go Winter Event can read more about it on the official Pokemon website. For all the latest updates on all Pokemon be sure to keep checking back here at GigamaxGames.com!