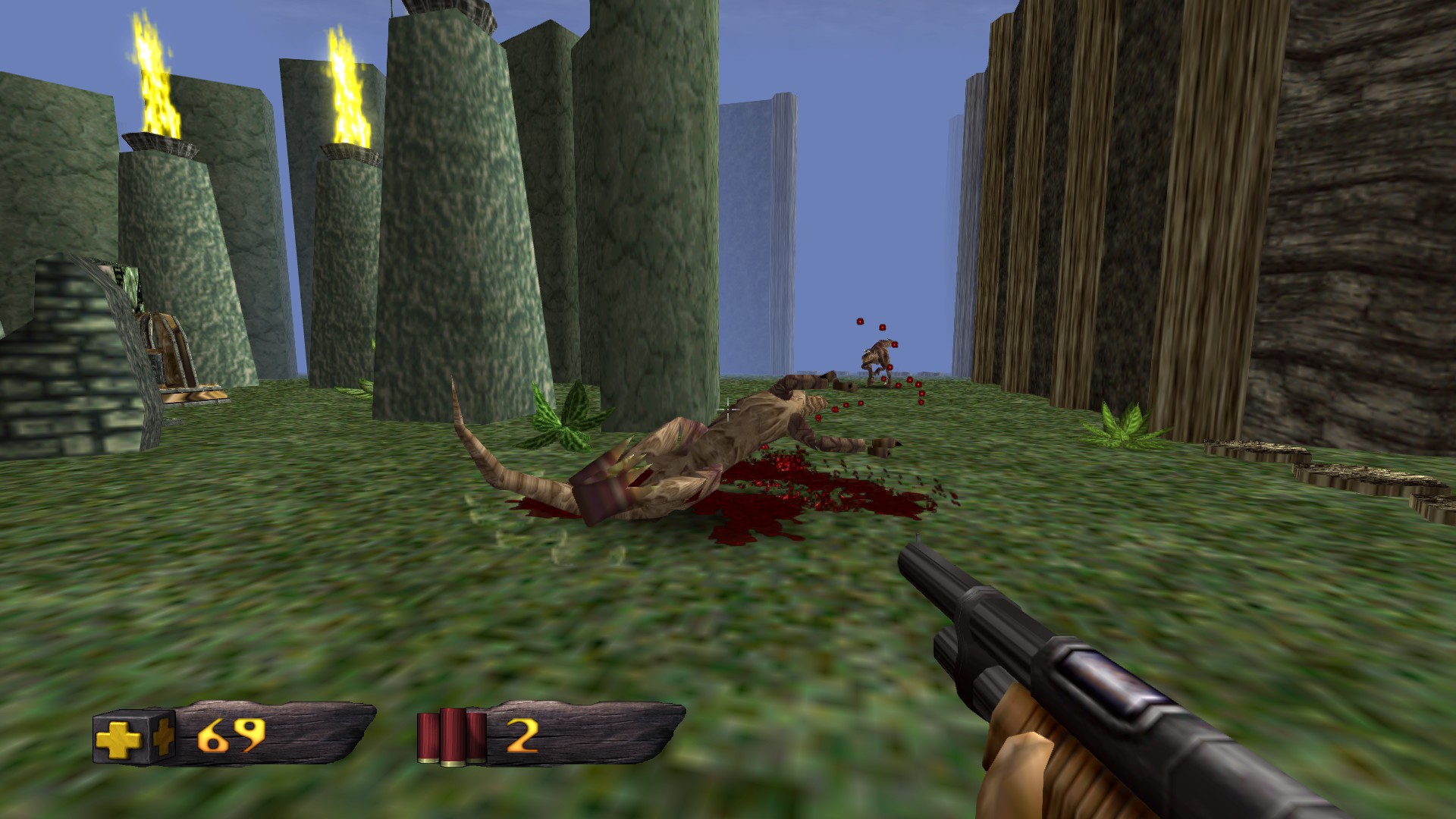 For Love of the Game: Turok: Dinosaur Hunter 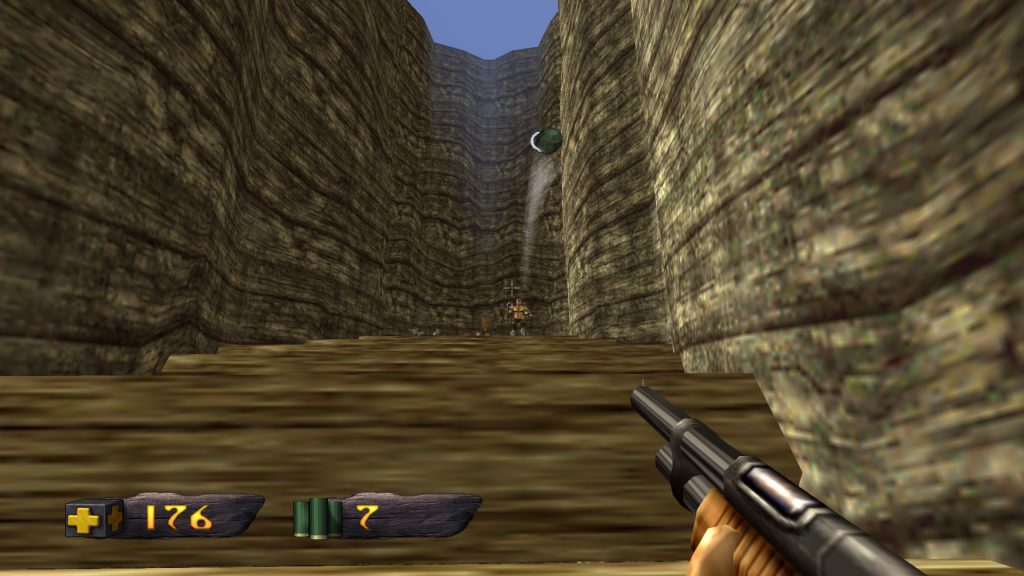 Nightdive has succeeded in bringing a beloved game from many of our childhoods into the modern era. They seem to have a penchant for bringing old games from defunct studios back from the dead, and I feel that we all owe them for this great service. Keep fighting the good fight Nightdive.

Taking on the role of Tal’Set as the current Turok(in the later games of the original series, you play the role of Joshua Fireseed). All Turoks function as protectors of the barrier between the Lost Lands and Earth as well as participating in an unending struggle to stem the tide of the nefarious Campaigner’s bid to rule the multiverse. Based upon a comic book series that ran from the mid-‘50s to the early ‘80s, the Turok games are one of the few game series to feature a Native American protagonist. It’s the only one to feature a pure-blood one, which is somewhat surprising given the rich lore in their culture. I would love to play through a game similar to the setting/events in the movie Apocalypto as an example. Pre-European conquest Tomb Raider? Yes, please.

While the gameplay is fairly rudimentary by modern standards, that is, you point guns at bad guys and press fire until they die. Strafing in circles is your best strategy for almost every enemy in the game with few exceptions. You can also attempt to make your foes attack each other, a feat that is much easier with the ranged enemies than it is with the melee based enemies. The caveat here is that like enemies will not attack each other, except for humanoids armed with guns. That is, Raptors won’t fight Raptors, Pur-Lin won’t fight Pur-Line. 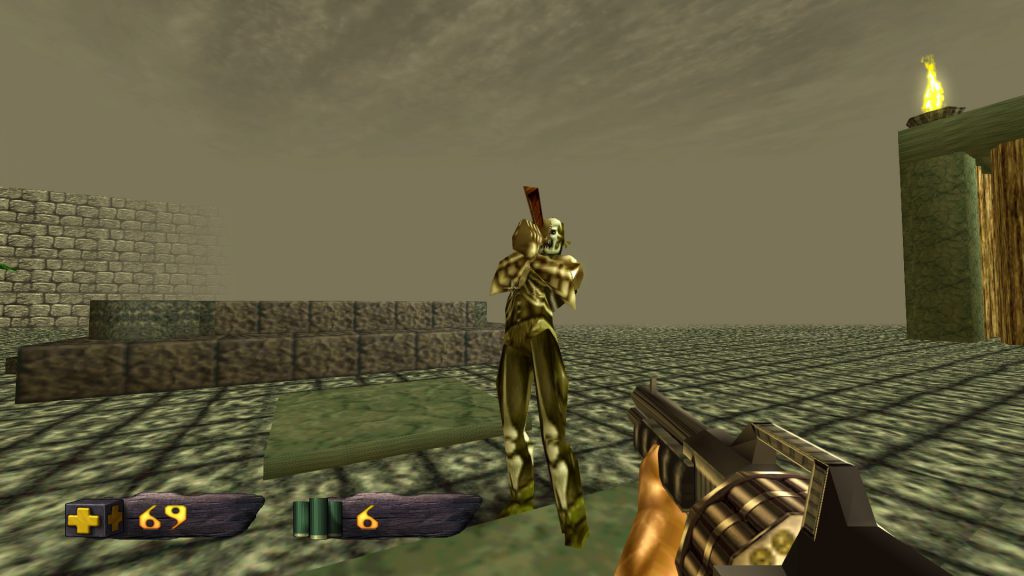 You are given access to a veritable cornucopia of weapons with to dispatch the various flora and fauna of the Lost Lands. Most of them are stock standard FPS fare but there are few standout weapons like the Particle Accelerator, easily one of the most unique weapons in the game, hell, in any FPS game that I have played. The Particle Accelerator charges up before automatically discharging, or you can unleash a torrent of directed plasma in front of you and most enemies hit by it will be burned to a crisp before finally exploding flinging giblets every which way.

The final weapon, the Chronoscepter is only available if you find all of the missing pieces scattered across the levels. The Chronoscepter goes boom in the most satisfying of ways, at least for the era that the game came from, for modern games, it’s rather lackluster even with the updated particle effects from Nightdive Studios’ remaster. I think the only major issue I have with the weaponry is how weak the shotguns are, especially on the higher difficulties.

The vast majority of the enemies you will face in Turok are humanoids, but there is a sprinkling of non-humanoids such as the goliath Pur-Lin(Giant Ape-like creatures, that look like angry mutant frogs) and dinosaurs such as Raptors. There’s even a small handful of bosses (Four total). The amount of dinos you face is rather minuscule considering the suffix of the game is “Dinosaur Hunter”, but I guess “Turok: Hunts Dinosaurs Sometimes” isn’t as catchy. 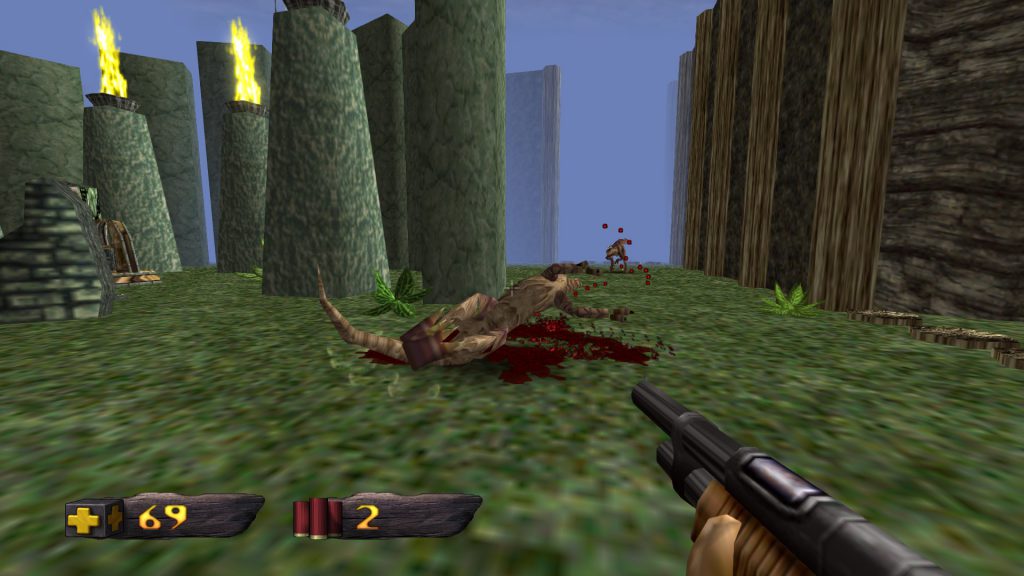 The enemies are not the only threat you’ll face on your trek through the multitude of interconnected worlds. There are a bevy of hazards sprinkled liberally throughout each level from the mundane and primitive stake traps (Long branches with sharpened stakes attached to them that swing out horizontally), flesh-eating plants that fire spikes at you, and the occasional falling rock, all of which serve to bring life to a mostly empty world.

Inexplicably, there are a series of jump puzzles across a few levels in Turok. Whose idea was it to put platforming into an FPS game? They deserve far more scorn than I can muster, maybe even more scorn than the entirety of gamedom can muster (that’s a lot of scorn for those keeping track).

On your quest to collect all the pieces of the Chronoscepter and defeat the Campaigner will find you venturing through a massive and ancient temple complex. Delve into the claustrophobic depths of a mazelike catacomb, run across bridges through a village high in the trees, trudge through a wasteland filled with fields of lava, and finally the assault the Campaigner’s fortress which is a labyrinth of steel corridors. Every level has a few secret portals that pop up from time to time, given away by the telltale throbbing hum. 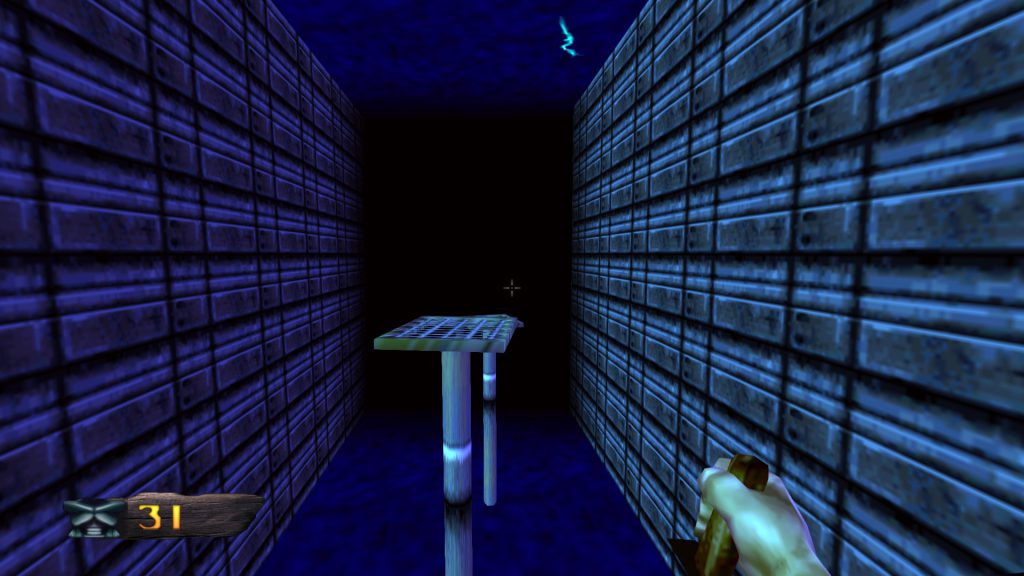 The journey starts out in the lush* jungles on the outskirts of Lost Lands, which functions as a hub for the game itself. After collecting the first few keys, you’ll find yourself in a giant cave with slightly raised stone floor with a series of stepping stones marked with glyphs that correspond to a specific key for a specific portal on the cave floor leading to an archway that become active portals to each sub-world of the Lost Lands once you insert the needed keys into the corresponding mounting affixed on the central platform.

*There are trees, some vine covered walls, as well as few monkeys, boars, and deer.

This is an old game, that means much of Turok’s content was limited by design choices of the original team (Iguana Entertainment) due to the technological constraints of the system it was created for in the first place (The Nintendo 64). The AI is pretty abysmal, the textures are low res, and the models are janky. The fog was initially used as a stop-gap to keep the framerate at a playable level, but it was put to good use by adding some much-needed atmosphere.

If were not for the fog, you would not be treated to seeing the monolithic structures that poke out of the mists at you as you approach them, nor would you have to tangle with dinosaurs charging at you from unexpected places. Even with Nightdive Studios stellar job bringing this game back from the abyss, there’s only so much polish you can put on a turd. I enjoyed my trip through memory lane, while I am honestly not sure how much of a factor nostalgia was, I expect it did play a rather large role in my enjoyment of the game so there may be some positive bias in my thoughts to the game as a whole.

Play Turok: Dinosaur Hunter if you want to see what helped influence the acceptance of the console FPS. Games like Turok, Goldeneye, and Perfect Dark all laid the foundation for games like Halo and Destiny.

If you want the flashiest of graphics with the gibbiest of gibs, I would just play the new Doom.

This review was written based off of the PC remaster of the game that was released in 2015 by Nightdive Studios and may not be applicable to the Xbox One version of the game.